The events of the past so torment Russia that the theater again has been staged between Russia and the west but the venue this time is different. Russia announced a full-scale invasion of Ukraine, therefore, the troops invaded on Thursday 24th February, marking the first major land war in Europe in the 21st century. President Joe Bidden has announced intense sanctions on Russia by blocking major Russian Banks and billionaires from getting access to the United States financial system and deployed troops of NATO in the Eastern rim. Bidden says, “This aggression cannot go unanswered”

The current Turmoil reflects the true depiction of Hobbesian Culture, “War of all against all” and Darwin’s theory of, “survival of the fittest”. Realism can be seen clearly in practice by the leaders of the Great powers. The world has witnessed the barbaric acts of Israel in Palestine, Prime minister Modi in Kashmir, and now Vladimir Putin in Ukraine. This has been proved as a dark century for liberalism.

Russia has attacked the capital of Ukraine ‘Kyiv’ along with major other cities and towns that has created chaos for civilians as they lost their shelter and fled on congested roads. After World War II, this has marked as Europe’s Darkest Hour by the president of Belgium. Thus, President Vladimir Putin has clearly warned the states not to interfere and said that those who will sneak their nose in, will face “consequences you have never seen” which directly points towards Russia’s Nuclear arsenal.

Both with the vision of ‘Us Vs Them’ are again active to ruin the fate of another unfortunate state Ukraine. This might bifurcate the world again into Eastern and Western blocs. The prediction of WWIII is being depicted after Russia waged war against Ukraine which is an exaggerated description of the situation.  The current escalated situation dates back to 2014 when the Pro-Russian Ukrainian government was overthrown which gave a signal to Moscow that Ukraine might align itself to the west in near future. Therefore, in response, Russian troops invaded Crimea located in the South of Ukraine. This unveiled the Cold War’s mentality of President Vladimir Putin.

Russia penetrated the sovereignty of Ukraine, though held a referendum in Crimea. The poll was 95% in the favor of Russia but Ukraine and the world community did not accept this poll. Thus, Crimea remained under Ukraine by Law. This conflict since then has been continued and taken the lives of almost 14,200 people estimated by the UN including over 3000 civilians

The disintegration of the Soviet Union was not the end of the Cold War nor did it mark a full stop to the Great power’s Show. Tensions have been aggravated between Russia and Ukraine for the last few months although they were long standing. It looks like Vladimir Putin still considers Ukraine as a part of Russia. The unrest in Ukraine was prominent in Luhansk and Donetsk regions which are controlled by Russia- backed separatists. Therefore, Russia recognized Donetsk and Luhansk region as people’s republics and independent. Putin deployed troops in these regions to maintain peace and challenged the west by crossing the red line set by the west.

The insecurity of Russia was not pointless as the increasing inclination of Ukraine towards the West was being witnessed. Ukraine was more interested in making ties with Europe and NATO since the Pro-Russian government was changed. The Sudden Influx in Ukraine and the West relation caused the demise of Ukraine and Russia’s relationship despite the historical fact that Ukrainians were the ancestors of Russians. Russians took Ukraine’s increasing ties with NATO and the EU as a security threat that pinched Moscow to take such a bold step that changed the security dynamics of the whole world overnight.

The full-scale invasion by Russia was predicted long ago when Putin invaded Georgia followed by the annexation of Crimea in 2014; his historical obsession for Ukraine was evident. Therefore, they had no power to stop him as no democratically elected Congress could hold him accountable. It might be much more than Ukraine. Putin has always criticized the United States invasion into Iraq and Afghanistan and whatever US did in the last two decades in the Middle East. He observed how international law was being used as a tool to throw might by the United States. The Ukrainian invasion by Putin could be his joker card played to give United States a reality check that the world is not a unipolar entity anymore.

This destructive foreign policy decision is not miscalculated by Russia. Consequently, before invading Ukraine Putin visited Xi and had an economic agreement so that European cut-off would not affect Russia’s economy to that extent. In addition, European countries were not able to put harsh sanctions like that of USA due to trade agreements with Russia which may impact their economy as well, and has also exposed the unanimity in the Western wing as well. Therefore, Germany was reluctant to push the limit as they are directly linked to the gas pipeline of Russia.

The Russian Invasion of Ukraine will have repercussions and will return Europe to militarized division. The geopolitical impact of this act will be beyond Ukraine since it depends upon how deep Russia may penetrate into western Ukraine. EU declared that 300,000 Ukrainians have entered the bloc since Russia started its offensive act reported by Al jazeera. More than 50,000 Ukrainians fled to other countries as reported by UN. This might reveal the accord of the European Union and NATO.

This act of Russia has once again exposed the fragility of International institutions and international law. It has shown how prone peace is before the Great powers. It has exposed the dubious great power politics which revolve around the interest of permanent members of the United Nations Security Council. Who are free to practice whatever they want and whenever they want. It has been reported on 26th February, that Kyiv is going to negotiate with Russia at the Ukraine-Belarus border which has ignited hope that it would mark an end to his bloody fight. The Ukraine Foreign minister says that we “will not give up a single inch of our territory” which reflects the rigidity of Ukraine’s stance. It ponders to the point that if they had to negotiate ultimately why did they indulged in war in the first place? Russia just used its power as a tactic to bring Ukraine down to its knee.

For now, Russia has waged the war which may not be reversed till a regime change in Ukraine would be more Pro-Russian if does not want to meet with the same fate again. In addition, Russia might demand the reversal of the technology asset that Ukraine got after the disintegration of the Soviet Union. This invasion would not prove the same results like that of Iraq or Afghanistan as Ukraine directly borders with Russia. Therefore, Russia would not favor political unrest in Ukraine as it will have a spillover effect on Russia as well. What Russia aspires is a Pro-Russian puppet government in Ukraine which would serve the interest of Russia rather than NATO or the European Union.

It is high time for great powers to realize that expanding power sphere will favor no one. The division into clouds will only bring chaos, instability, and insecurity to the world. They must give up on the proxy war and cold war mindset to preserve the peace of the world and coexist peacefully. Otherwise, this century like the previous one will be indulged in deadly wars but this time the destruction and consequences will bring the world to a dead end due to the invention of Nuclear weapons. They need to realize if WWIII occurs world will meet its end and no state will remain alive to be ruled then. No historian will be left to write the hysteria of the Great Powers.

Sajjal Sultana is currently an Internee at Global Affairs. She is the student of International Relations at National Defence University Islamabad. She can be reached at sajjalsultana1@gmail.com. 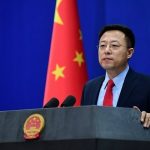 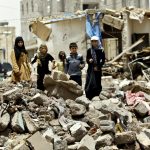