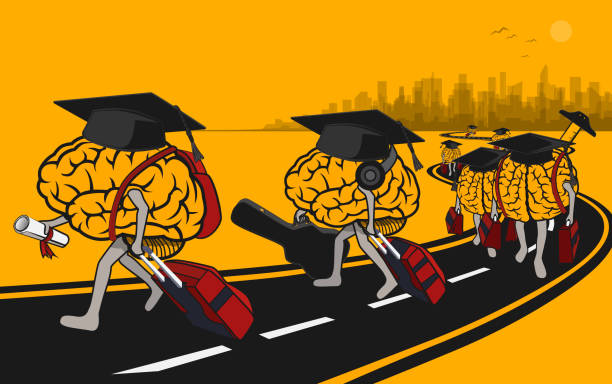 The graduate brains leave the city with their luggage. (Used clipping mask)

Brain drain, often known as “human capital flight,” refers to skilled individuals migrating to different parts of the world in searching for a better standard of living, greater salaries, accessibility to sophisticated technologies, and more stable political situations. The departure of groups of specialists, healthcare experts, academics, engineers, or finance experts is referred to as brain drain. It is a major source of concern in developing countries, such as Pakistan. The country of origin suffers two big negative consequences when highly skilled individuals relocate. First, there is a loss of skill, which causes to a lack of that profession’s supply. Second, it causes economic instability. Because professionals earn a large share of the wage, their departure reduces consumer spending.

The practice of relocating skilled workers dates back to the dawn of time. The term “brain drain” was coined in 1960 to describe how skilled persons who were a country’s asset migrated to three countries: The United States, Canada, and the United Kingdom.

The problem of brain drain has been severe and significant since 1960s. Globalization has played an important role in spreading this phenomenon by providing better and more luxurious living conditions. Globalization has made it possible for highly trained persons to migrate to economically developed countries and be well compensated. Following colonialism, there was a brain drain between developed and underdeveloped countries. Since the 1980s, the United States and Canada have intensified their international rivalry in order to recruit highly skilled professionals and exacerbate the inferiority mentality of emerging countries’ lack of advanced prospects.

The highly intellectual’s great potential, such as IT experts, Architects, Healthcare professionals, Scientists, and the human capital flight of fresh post graduate students, has been reflected by the Scientific Diaspora. Tragically, the COs (country of origin) have been losing nationalistic, moral, and ethical impulses as a result of pragmatic materialist mentality and the quest for possibilities, which has cast a large burden over the developing world’s future.

Human capital is in scarce supply to meet the needs of advanced industrialized countries and global expertise civilizations. It is as natural as human nature and as potent as governmental structures to maintain self-interest. In the developing world, lawmaking is lacking both in academia and at the government level.

There are two basic reasons as to why individuals shift locations. Before 1950s, there were some significant human movement routes that were underlined in the 1960s. The reasons can vary from place to place, such as enough products and service facilities, the connectedness of numerous ethnic groups, political unrest, health problems and a lack of economic opportunity. The “push factors” of capital flight are the migration of academics and talented workers, or emigrants from their home nation. There are numerous parallel and reciprocal causes for immigrants to be drawn to host nations, known as “pull factors”.

There are push factors that cause brain drain from developing countries to advanced economies, including Poor living standards and amenities Underproduction of trained and semi-skilled workers, insufficient conditions for workers, a limited scope of specialization, inadequate salaries Hiring and training prejudice, Conflicts and battles, social upheaval, political turmoil Inadequate facilities, including support workers; insufficient research finances; and a lack of technical apparatus and tools. Due to lack of personal freedom, the quality of academic system is diminishing.

Pakistan has initiated the Global Faculty Hiring Program, which aims to return Pakistani skilled professionals to their home country to share acquired skills with Pakistani teachers and students, resulting in Brain Gain for Pakistan. Moreover, following the Counter Brain Drain Program, HEC launched Pakistan Education And Research Networks (PERN), a fiber optic network connection with high bandwidth that connects 60 public sector universities to promote transmission of data and collaborative learning. It is an online learning platform that was established in 2005. Students and faculty have unlimited access to 23000 full-text publications with back editions through the library. Global research and teaching collaboration is promoted through joint research initiatives with universities in the United Kingdom, the United States, South Korea, Sweden, France, Austria, Germany, and China.

To prevent brain drain in Pakistan, HEC has established a research funding programs through which resourceful researchers are accorded research grants. According to the programs, researchers from all fields of study (sociology, liberal arts, basic sciences, biological sciences, medical fields, technology and engineering, and agricultural sciences) received acknowledgement and monetary support. Experienced teachers, basic resources, adequate funding, detailed curriculums, budget – friendly tuition fees, and the accessibility of grants and loans, research centers, and appropriate educational support should be provided in our academic institutions. To some extent, all of these attributes are budget-dependent. A significant financial dedication from the state is obligated for attainable decent education. Talent acquisition has not been a tremendous success in a number of brain drain-affected countries. Contents and teaching methods, as well as academic development policies, must be implemented to ensure continuous absorption of individuals required by various societies and sectors of the economy. Education programs and needed assistance in mentoring can alleviate the need to study abroad. Bilateral international aid programs and body fellowships must be maximised for such training courses. The provision of optimal circumstances of stay and employment for highly qualified personnel in their home countries should be prioritized.

Zahra Nayyer is an intern at Global Affairs. She is pursuing her Bachelors from National Defense University Islamabad. Her areas of interest includes the Middle East, South Asia, International Politics, and International Relations.