ISLAMABAD / WASHINGTON: Amid the World Health Organi­sation’s (WHO) warning that the humanitarian situation in flood-ravaged Pakistan is expected to get worse, Japan pledged to give emergency aid of $7 million, Qatar launched an air bridge and the UN refugee agency mounted a huge airlift operation from Dubai.

More than 33 million people in Pakistan have been affected by the flooding, brought on by record monsoon rains amplified by climate change.

The WHO said over 1,460 health centres had been damaged, of which 432 were fully wrecked, mostly in Sindh. More than 4,500 medical camps have been set up by the WHO and its partners, while more than 230,000 rapid tests for acute watery diarrhoea, malaria, dengue, hepatitis and chikungunya have been distributed.

Such diseases are already circulating in Pakistan, alongside Covid-19, HIV and polio, and “now all these are at risk of getting worse”, WHO spokesman Tarik Jasarevic said. “We have already received reports of increased number of cases of acute watery diarrhoea, typhoid, measles and malaria, especially in the worst-affected areas,” he said.

“The situation is expected to worsen,” he warned, as it was still difficult to get to areas hit hard by the floods.

Japanese Foreign Minister Hayashi Yoshimasa, while announcing the emergency assistance in Tokyo, noted that rain and flooding in Pakistan had led to over a thousand of deaths besides infrastructure damage.

Meanwhile, the UNHCR is scaling up support in Pakistan by mounting a huge airlift operation from Dubai meant to focus on Larkana and Sukkur. The first three of nine scheduled flights have already arrived here, with the other five on their way.

Meanwhile, a host of international visitors are expected to Islamabad this week while some senior Pakistani leaders, possibly including Prime Minister Shehbaz Sharif, may also visit world capitals for consultations later this month.

The most prominent among the visitors to Islamabad is the UN Sec­retary General, Antonio Gute­rres, who is arriving on Sept 9 to review the devastations caused by the floods.

Then on Sept 22, Foreign Minister Bilawal Bhutto-Zardari is expected in New York to attend the UN General Assembly. He will then visit Washington on Sept 15 for talks with US officials.

Meanwhile, Swedish environmental activist Greta Thunberg complained in an interview to Reuters that politicians and the media in the West had “chosen not to communicate” that disasters like the floods in Pakistan and the climate change “are very closely interlinked”.

“Just take Pakistan now, as an example, a very clear example,” she said.

Fatima Bhutto, in a piece she wrote for The News York Times, stressed that “climate change very likely played a role in the extremely heavy rains” in Pakistan. “So, you can call these people climate refugees,” she argued.

On Tuesday, The Washington Post published a desperate appeal from Lawang, a flood victim in Mirpur­khas. “We have been here in these shelters for 16 days, but no one came to us,” he said. “No one is caring for us.” 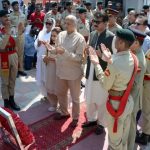 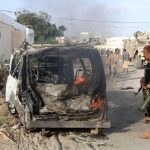