ISLAMABAD   –   Minister for Planning and De­velopment Ahsan Iqbal on Tuesday announced to launch ‘Adopt a District’ programme with the cooperation of pro­vincial governments to lend a helping hand to the districts worst affected by the cata­strophic flooding.

Briefing media persons in Islamabad along with Nation­al Disaster Management Au­thority (NDMA) Chairman Lt Gen Akhtar Nawaz and oth­ers, Ahsan said the govern­ment was doing all it could to make those affected by floods stand on their feet again. He said under this programme, the administrative, human and health sector resources of major districts, especial­ly in Punjab which have not been damaged by the floods will be left at the disposal of those affected by the calam­ity. He said it is time to ex­press complete compassion and solidarity with the peo­ple of flood-affected districts and this will be a great ser­vice to this country. He said the government was try­ing to restore routine life in flood-affected areas.

The minister disclosed that around 100,000 of the live­stock had perished in the flood-hit provinces of Sindh, Balochistan and southern Pun­jab so far. “Due to the deaths of cattle in such large numbers and the destruction of crops, the country is facing food in­security,” he said, and added, “About one-third of the coun­try is under water and 30 mil­lion people have been affected by the natural disaster.” Ah­san Iqbal said the government is working to establish mobile clinics and maternity hospitals in the affected areas keeping in view the health needs of the women there.

Ahsan said that two mil­lion mother and child nutri­tion packs will also be raised with the support of universi­ty students. He said the vice chancellor of each university will task every student to pre­pare this nutrition pack indi­vidually or with the support of the community to help those women and children whose lives are at stake in the flood-hit areas. He said the govern­ment is working to establish mobile clinics and maternity hospitals in the affected are­as keeping in view the health needs of women there. The Minister also appealed to the religious scholars to encour­age the people in their Friday sermons to extend a helping hand to the flood victims.

The NDMA chairman said that despite the fact that many items had been delivered to the flood-affected people, still there was an acute shortage of tents in these areas. “We bad­ly need warm clothes, blan­kets and quilts for the people sitting out in the open in view of the approaching winter sea­son,” he said. He said that Sindh is the most affected province, hence, 55-60 percent relief goods have been sent to the province followed by 15-20 percent to Balochistan. Relief goods have also been provid­ed to Punjab, Khyber Pakh­tunkhwa and Gilgit-Baltistan, he added. He said that a com­plete record of relief goods is being maintained to ensure transparency.

Coordinator National Flood Response and Coordination Center Major General Muham­mad Zafar Iqbal said connec­tivity with Balochistan has been restored while trains are also plying on ML-1. He said provision of food to the flood affected areas is being en­sured. He said the country has sufficient stocks of wheat and the government will take ac­tion against those involved in hoarding. He further said that draining the water out of agri­cultural land in Sindh is con­tinuing, expressing the con­fidence that most of the land there will be available for the cultivation of wheat crop. He said sunflower will be grown in the land where water will be standing. 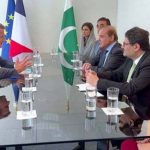 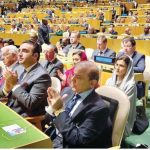