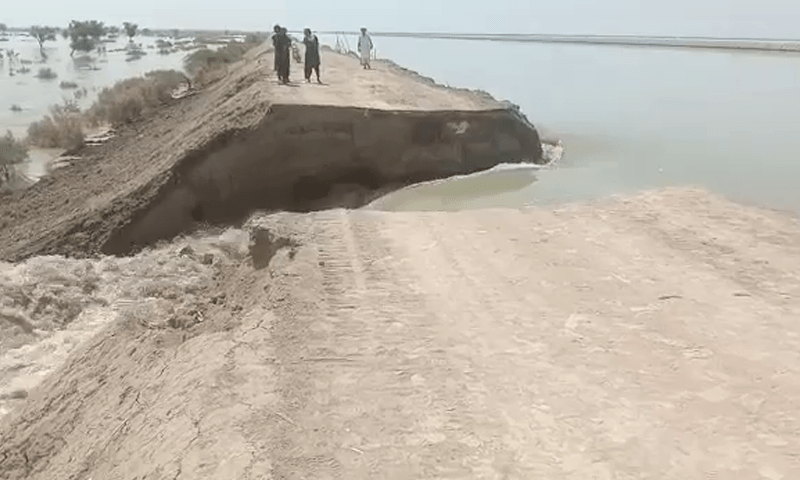 Water and Power Development Authority Chief Engineer (water) in Sukkur Naeem Qadir Mangi confirmed the development, explaining that an “afflux” had been created as Manchhar had not been receiving water from MNVD for the last couple of days.

“Finally, this afflux eroded a part of the bank at RD-10, causing a breach in MNVD.”

Manchhar lake has been witnessing a surge in its water level in recent days as floodwaters from the north and hill torrents from Balochistan flow southwards to converge in Sindh, leaving behind a trail of deaths and destruction.

As of 6am today, the water level in Manchhar was recorded at 123.25-foot reduced level, Mangan said.

The reduced level of 124ft is described as dangerous.

Later, an engineer of the provincial irrigation department, Mahesh Kumar told Dawn.com that the water in the lake had dropped further to 123.2-foot reduced level. The was one decimal point less than the level of 123.3 RL recorded the previous night, he added.

Earlier, authorities had breached the lake’s dyke at two locations, in a bid to save the densely populated cities of Sehwan and Bhan Saeedabad from flooding by diverting water to less populated areas.

A Dawn.com correspondent present at the site reported that around five people were swept away by raging waters and later rescued after water burst through the breach at MNVD.

He said the five individuals were on motorcycles and passing by the drain when the path they were on collapsed and they fell in the raging waters.

Meanwhile, there were also reports of flooding in the five union councils of Sehwan — Jafferabad, Bubak, Wahur, Channa and Arazi — aggravating as a results of breaches at RD-14 and 52.

The reports of flooding began coming on Monday, with the first breach having been made on Sunday.

Dawn reported that the runway at Sehwan’s Shahbaz Airport was under a foot of water while the Pak-Arab refinery located in the area was also inundated.

Meanwhile, there were also reports of over 100 villages in Sehwan’s five affected UCs experiencing worsening floods, which compelled residents to evacuate.

Sardar Sikandar Rahopoto, an MNA from Sehwan, told Dawn.com on Tuesday that a population of around 150,000 was affected due to breaches on Manchhar’s dyke and most of the affected families and individuals had been evacuated.

Meanwhile, a motorway police officer, Saqib Ahmar, said that the Indus Highway from Sehwan to Bhan Saeedabad had drowned due to flooding and traffic was also closed for that section.

Being downstream on the Indus River, the southern parts of the country have witnessed swelling river waters flowing from the north. Pakistan’s limited dams and reservoirs are already overflowing and cannot be used to stop downstream flows.

An update on the Flood Forecasting Division’s website showed that there was a high-level flood in the Indus River at Kotri.

Separately, the National Flood Response Coordination Centre (NFRCC) said the floods had claimed 11 lives over the past 24 hours across the country, taking the death toll since June 14 to 1,325.

Scattered thunderstorm/rain of moderate intensity with isolated heavy falls were expected over the upper catchments of all major rivers along Khyber Pakhtunkhwa, Islamabad and Rawalpindi, Sargodha, Gujranwala, Lahore and Faisalabad divisions, it said.

The centre said that 363 army helicopters had been flown to various areas for evacuating stranded people. “In the last 24 hours, 25 sorties have flown and evacuated 131 stranded individuals and delivered 32 tons of relief items to flood affectees,” the latest update said.

It added that so far, 3,716 stranded Individuals had been evacuated through these helicopter sorties.

Further, the centre said that there were 147 relief camps in Sindh, South Punjab and Balochistan while 284 relief item collection points had been established across the country.

“More than 250 medical camps established so far in which more than 97,000 patients have been treated all across the country and provided 3-5 days’ free medicine,” the NFRCC said.

The centre also said that construction of Saggu bridge at N-95 (DI Khan) was in progress and was likely to be completed by today.

“Electricity supply restored in Khuzdar and repair work on Dadu-Sibi-Quetta transmission line is in progress,” the statement said, adding that the gas supply in Quetta had been partially restored.

Meanwhile, Japan announced it would provide emergency grant assistance of $7 million to Pakistan, according to a news release issued by the Japanese embassy.

Japanese Ambassador to Pakistan Mitsuhiro Wada reaffirmed his commitment to support the country and assured his government stood ready to help the flood-affected people.

“Given the rapidly rising scale of needs, we consider it critical to extend our best support and stand available to the affected”, he said.

Qatar also announced it had launched an air bridge to continue the relief campaign for flood affectees, according to a press release from the Qatar Fund for Development.

It said a relief aid plane was sent through the Emiri air forces, in cooperation with the Permanent Committee for Search and Rescue of the Internal Security Forces of Lekhwiya, Qatar Charity and the Qatar Red Crescent, containing 23 tonnes of medical materials, medicines and special materials to improve shelter facilities.

The UN refugee agency also said it was scaling up support to Pakistan.

“Starting Sunday, UNHCR has mounted a huge airlift operation from Dubai — meant to focus on the worst affected areas of southern Sindh province, where Larkana and Sukkur are the most impacted cities in the country with limited assistance for those displaced from their homes, who require various essential supplies,” reads a news release from the agency.

It added that the first three of nine scheduled flights had arrived on Monday in Pakistan — with the other five on their way. The aid included 40,000 sleeping mats, nearly 15,000 kitchen sets and some 5,000 multi-purpose tarpaulins.

The UNHCR said that an additional six flights are scheduled from Dubai for Wednesday and Thursday, with 4,500 sleeping mats, 400 tarpaulins, and nearly 5,000 kitchen sets.

“UNHCR trucks carrying tents for some 11,000 families are also on the road from Uzbekistan, with more convoys scheduled,” the UN refugee agency added. 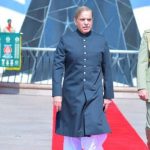 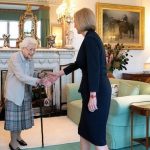