ISLAMABAD: The newly appointed United States Ambassador to Pakistan Donald Blome on Wednesday expressed concern over the ban imposed by the government on the import of luxury goods, which also included food items, saying it was hurting the interest of the business community.

In a meeting with Commerce Minister Naveed Qamar, the US envoy also discussed difficulties faced by businesses due to the import ban besides ways to increase bilateral trade between the two countries.

Mr Qamar assured that the ban is temporary in nature and a certain relief has already been granted to some of the shipments.

Mr Blome was assured that the commerce ministry was working diligently for the resolution of any issues being faced by businesses, including those of US. The commerce ministry has already submitted a summary for withdrawal of the ban to the Economic Coordination Committee of the Cabinet in this regard which was deferred in its last meeting.

An official announcement said Mr Qamar also requested the US envoy for early revival of the GSP Scheme which will further provide market access to Pakistani exporters.

Mr Qamar underscored the importance of the decades-long relationship between Pakistan and the US. The role played by Pakistan in averting a humanitarian crisis in Afghanistan, and the efforts undertaken by it to ensure stability of the region were also highlighted.

US Ambassador appreciated the significant growth seen in exports from Pakistan to the US and expressed the hope for a deeper and wider bilateral relationship in the fields of trade and investment, digital services, science and technology, education, energy, and climate.

Both sides pledged to further strengthen the mutual relationship and work together for the peace and stability of the region. 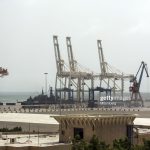 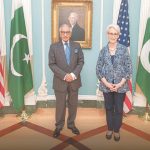