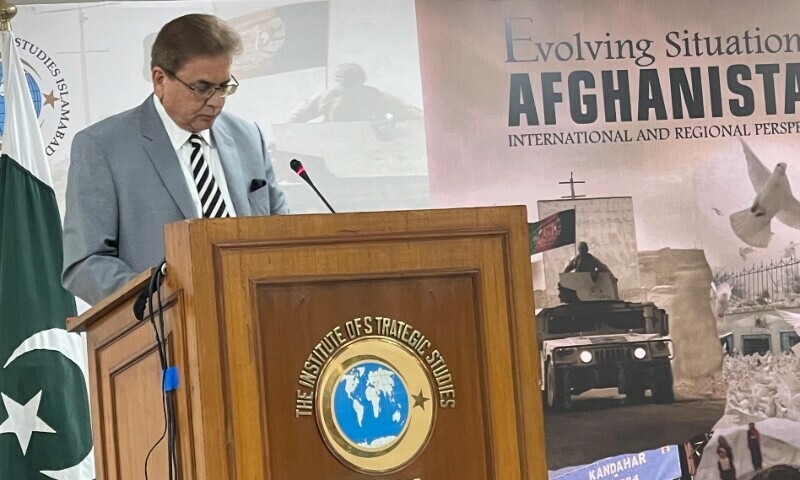 Pakistan’s special representative for Afghanistan Mohammad Sadiq on Wednesday said that the success of talks with the Tehreek-e-Taliban Pakistan (TTP) depended on the behavior of the banned group.

He was speaking at the launch of a book, titled “Evolving Situation in Afghanistan: International and National Perspectives” in Islamabad.

In his speech today, Sadiq said that the Afghan Taliban had proven to be helpful in Pakistan’s talks with TTP, which he claimed were at a nascent stage.

“Their success would depend upon the behavior of TTP.”

Sadiq’s remarks come ahead of a roadside bomb attack that killed key TTP leader Omar Khalid Khorasani in Afghanistan’s Paktika province along with two other leaders.

So far, no group has claimed responsibility for Sunday’s attack.

In a statement on Tuesday, the TTP spokesman said that Khorasani was a part of the TTP team negotiating with Pakistani officials and tribal jirga.

It is pertinent to mention here that Khorasani’s killing is expected to affect talks between the TTP and the country that have been ongoing since June this year.

Meanwhile, talking about the neighbouring country, the Pakistani envoy opposed exerting pressure on the Taliban government — which first took control of Kabul on August 15, 2021.

“Since August, forceful calls for inclusivity by the international community have increased pressure on the Islamic Emirate’s leadership.

“Political structures have traditionally been considered as a country’s internal issue. Therefore, we cannot be too prescriptive in this regard,” Sadiq told the participants.

He insisted that the path of reconciliation and inclusion would lead to more stable and prosperous outcomes than politics of exclusion and confrontation.

Furthermore, the Pakistani special envoy backed calls for the reopening of girls’ higher secondary schools, highlighting that the international community is expecting unequivocal actions regarding girls’ education from the Afghan authorities.

“Opening of girls’ secondary schools will not only signal to the international community an openness on behalf of the interim Afghan government but will also ensure Afghanistan’s long-term societal progress,” he said, adding that “being neighbors with deep cultural and religious affinities, we may be sympathetic to certain points of views and nuances, but we believe in the right to education for everyone as a fundamental human right.”

Over the last few months, Pakistan has been urging the international community to remain constructively engaged with Afghanistan.

The international community’s focus should not be diverted from the dire humanitarian and economic situation in Afghanistan owing to events taking place elsewhere, Sadiq said.

Meanwhile, Pakistan’s Ambassador to Afghanistan Mansoor Ahmed Khan, while giving his keynote address, shed light on a number of factors.

He explained that peace and security in the country had significantly improved since the Taliban takeover, pointing out that accessibility had improved in several parts of the country.

This, he said, had been also confirmed by the United Nations’ presence there. “In the past two decades, rural Afghans faced the problem of night raids, but this is not the case today.”

While talking about the economy, Ahmed stated that after the US withdrawal, the Afghan economy had been domesticated. “With the absence of 12 to 13 billion dollars in the reserves, the country presently has 3 billion only, which is a stark contrast.”

He went on that the Afghan government was constructively engaged with the international community and the presence of its diplomatic corps was a testament to it.

Afghan former deputy foreign minister Jawed Ludin, on the other hand, said that the Taliban ascension has been a turning point for Afghanistan.

He said that the region had a shared vision and a common platform for active engagement was required.

Ambassador Ludin reiterated that Pakistan’s regional approach was worth appreciating and that highlighted the country’s ownership of the issue.

He added that the region has a shared past with Afghanistan and should have a shared future as well, with a vision encompassing unity and peace.