Seyed Mohammad Ali Hosseini in an interview with a Pakistani News Channel said he is very keen to enhance ties between Iran and Pakistan. He said Pakistan stands high in Iran’s foreign policy and the Supreme Leader of the Islamic Revolution has always stressed upon stronger ties with Pakistan.

Hosseini said: The Islamic Republic of Iran has so far fulfilled its obligations to Pakistan in various contracts, including electricity and gas supply contracts, and we are waiting for the Pakistani brothers to fulfill their obligations under joint cooperation projects.

He said that currently, Iran is exporting 100 MW of electricity to Pakistan which can be increased to 500 MW immediately. “We are also working on barter trade with Pakistan and have been cooperating on the establishment of border markets,” said the envoy.

The diplomat added that both countries right now are discussing free trade agreements and the resumption of banking channels.

Ambassador Hosseini to another question said Iran and Pakistan share a long border and sometimes terrorist and organized criminal groups carry out their activities to sabotage peace at the border.
He said that Pakistan is carrying out fencing work at the joint border and we have been informed that the 200km part of the border would be fenced by the end of 2021.
He further said due to strong military cooperation between the two countries, Pakistan Army Chief General Qamar Javed Bajwa had paid two official visits to Iran while Chief of Staff of Iran’s Armed Forces Major General Mohammad Bagheri also visited Pakistan. “Now we are excepting General Bagheri’s second visit to Pakistan,” he said.

He highlighted that due to strong cooperation between the security force of Iran and Pakistan the terrorist activities in the border areas have been reduced considerably.

Tehran’s expectations from the Biden administration:

Seyed Mohammad Ali Hosseini to a question said that Joe Biden during his election campaign has announced to return to the JCPOA but soon becoming the President of the US he has been following the policy of Trump.

He noted that the JCPOA is an international agreement signed between Iran and P5+1 supported by the UN Security Council resolution. He said that all members of the agreement are bound to fulfill their commitments.

He said that Trump not only withdrew from the agreement but also put pressure on other members of the deal to do the same. The ambassador said Iran is the only country that has been honoring its commitments under the JCPOA which is also confirmed by the IAEA in its 15 official reports.

He said that Joe Biden should rectify the mistakes of Trump and lift unjustified sanctions from Iran.

Sanctions an opportunity for Iran’s economy to flourish:

The ambassador said Iran has been resisting the American hegemony for the last forty years and we have turned these sanctions into an opportunity to stand on our own feet.

“We have made achievements in the field of science and technology which are being recognized at the global level,” he noted.

Seyed Mohammad Ali Hosseini noted that because of these illegal sanctions we were not being able to purchase medicines and other necessary equipment to fight the challenge of the coronavirus.

He noted that even the neighbors and friends of Iran are being affected due to these unjustified sanctions.

The ambassador expressing his views said there is a huge potential for enhanced economic ties between the two countries. He suggested regular exchange of political delegations between Iran and Pakistan.

Ambassador Hosseini went to say the level of defense cooperation between the two states is very good.
“We have a complete plan to enhance cooperation with Pakistan in all sectors,” the envoy said.

He added that cultural ties of Iran and Pakistan should be increased with the exchange of cultural delegations and Iranian Cultural Consulate can play a very important role in this regard. “We want to encourage people-to-people contacts between Iran and Pakistan,” said the diplomat. 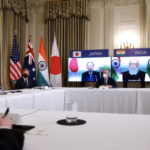 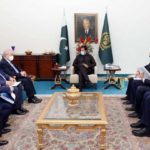